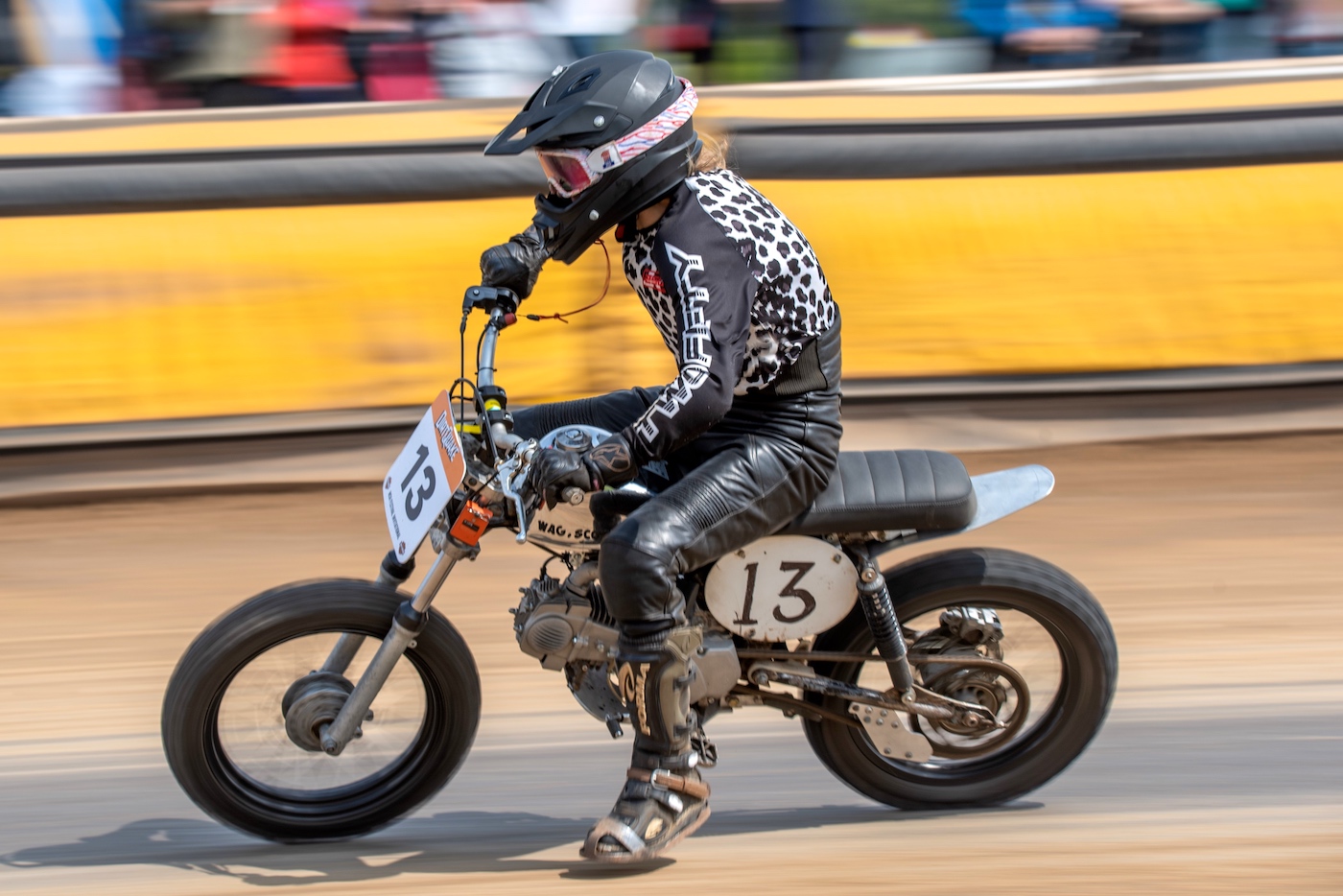 The WRC: A Unique Moto Platform For Women by 250London

Something you continually find within the custom community are boutique moto brands – driven by a love of motorcycles and an intense passion to ‘make‘.
They’re the skilled artisans, creative teams and wrenchers – that make the gear we wear and bikes we ride, that bring a heap of joy.

250London is one such boutique moto brand. Launched by a couple in 2015 – this energetic London-based brand designs and produces vibrant moto gear for Motocross, Flat track and Downhill MTB riders.

RENCHLIST caught up with Jennifer Johnston [Jen], one half of 250London duo at the Bike Shed Festival earlier October 2019. We chewed the fat, snapped a few shots and discussed 250London’s relatively new initiative; The WRC.

What is 250London and who runs it?

Jen: My talented husband, Adam Waite, founded 250LONDON in 2015, originally as a vintage MX brand, and it has gradually evolved to be an MX, Flat Track and Downhill MTB brand but still with a hint of retro style about it.

Adam’s a menswear designer by trade and has been riding dirt bikes since he was 10 years old, so he was compelled to start 250LONDON as a way of merging his passion for dirt bikes with his experience of design and manufacturing. The WRC came much later, just a few months ago actually.

My background is MTB but I’ve recently been inspired to get on a dirt bike. And that’s all thanks to the great women, I’ve got to know who race Flat Track etc. I did a ‘Days on the Dirt’ with Leah Tokelove, which was brilliant and got me hooked.

Jen: We [Jen and husband], came up with the 250 WRC idea together while pondering how 250LONDON could further support women riders; so many of whom buy and ride in our gear.

As a young, independent brand we have limited resources, there’s no corporate cash sloshing around. Although we help many riders, with discounts and complimentary kit, we thought it would be great to offer them a platform and place them firmly in the spotlight. Ultimately, give them the recognition and exposure usually reserved for only the top riders.

What was the initial inspiration behind launching The 250wrc?

Jen: I’ve always been really interested in hearing other women’s stories – particularly how they got into biking and how riding has changed their lives. Until now, there wasn’t a platform or publication which gave women riders any promotion outside of their own scene.

Additionally, with all the different disciplines, there’s so much going on, and I wanted to open them up to everyone. That’s in part because I know MTB women who are keen to get on a dirtbike and vice versa.

On The WRC, you can read stories from female riders in so many arenas; like Flat Track, Enduro, MX, as well as Downhill MTB and Adventure Riding, on and off-road. The cross-discipline support the women show each other is heartwarming and they’re really inspiring each other with their honest, down-to-earth stories.

Whom did you have in mind, when you first thought of creating The WRC?

Jen: We created The WRC for the everyday rider, the privateers and the weekend warriors because they deserve a moment of glory as much as the pros do. We’re encouraging women riders to share their stories and experiences. There’s no pretension on The WRC, we’re not too cool for school and there’s no need to put on a brave face.

I can reassure them that whether their story is one of success or of failure, advantage or adversity, the right people will be reading it and their honesty will mean a hell of a lot to them. I get many emails from women. Mostly, expressing how much they’re enjoying the stories – that, they’ve been inspired to give a new discipline a shot, to get back on their bikes after some time off. Or simply, that they’ve made new contacts through the Instagram account, which grew so quickly from a standing start.

We support even more riders on the Instagram account actually. Over on our Moto and MTB blog, we host full length, engaging stories. And, on the Insta account, we share lots of other stories and achievements that we’re sent.

We get tagged a lot. There’s so much content being offered up, it’s fab! There’s been a really great buzz since we launched the blog in August so I’m working hard to keep up the momentum!

What are the goals and mission of The 250wrc?

Jen: To be honest, when we launched, we figured that the direction of the club would be dictated by the members. There was no master plan other than to shine a spotlight on as many amazing women riders as possible and to see where that took us.

We got some other brands involved, offering giveaways. Oh yeah, stickers and giveaways, that is how you kick off a new club! They [stickers and giveaways] created such a great atmosphere around The WRC. However, ultimately, we’d like to organise get-togethers, maybe ride-outs and small events.

I’m trying to avoid the club being too UK centric though. We have members all over the world and gradually we’re publishing more international stories too. Nevertheless, the most important thing is that the many women riders, whom I’d describe as ‘lone-rangers’, now feel part of something, and I love that!

Not everyone has a crew or a ‘girl-gang’ of riders, it’s easy to feel detached, but The WRC is giving many women riders a club to feel a part of. And, that’s despite only on a virtual level for now [for most of the women]. If we can help hook up riders in real life, then great.

What are the perks of joining 250wrc?

Jen: Non-material perks are; feeling like you’re part of a club. Materially speaking, discounts and treats from 250LONDON and other brands. We try and run as many giveaways as possible and when women sign up via the website, they receive an exclusive discount code to use only on the 25OLONDON website, on any products.

We also have 250 WRC merch, which has been very popular – tees, truckers, neck tubes and the stylish club jersey! The women look great in the club kit and it makes me feel pretty proud to see them wearing it.

I’m speaking to other brands to see how we can work together – Melon Optics, for example. They loved the initiative and sent me some of their new Diablo Goggles for a WRC competition. That was a popular one, and the Fabulous Eudoxie Unchanged Lady gave me lots of their pins to giveaway as an incentive to sign up. So, there will be more fun stuff like that coming up.

Who are The WRC’s typical members?

Jen: I wouldn’t say there’s a typical member, they’re so diverse. I love that we have road riders, Dirt bikers, Trials riders, Super Moto and Speedway riders as well as MTB riders and Downhillers.

Additionally, many of our members are women who’ve only recently started riding and are just finding their feet and making new friends in the biking scene.

First and foremost, The WRC is inclusive, friendly, approachable and welcoming, I wouldn’t have it any other way. But that’s also how we run 250LONDON, it’s who we are as people, and luckily for us, that means we also attract likeminded people, to the brand and the club.

What do you ride?

Jen: Well, that is evolving! Adam’s a Motocross rider, it’s in his blood. He’s had many bikes over the years from a Bultaco Pursang, CRF450’s and he’s currently repping a ’00s 125 Two Stroke.

I ride an Orange Four Full Suss MTB and just got myself a Honda CRF, so I can join those fabulous dirtbike women on the track. I’m determined to give Flat Track a go, at some point!

Being full-on with the brand can be restricting sometimes but we just have to be flexible and ride when we can. We showcase at many moto events where we can mix with some great riders and that’s a good alternative to when we’re not riding ourselves.

What’s been the highlight so far of the 250London / 250wrc journey?

Jen: 250LONDON is always growing and gaining recognition. Naturally, we’re just delighted when riders choose our products over the established, corporate, mainstream brands, although it is an uphill struggle, we have many challenges.

It’s Better In The Wind – Short Film By Scott Toepfer

It’s much easier for riders to follow the crowd and play it safe. However, we know fine well, it’s a special kind of person – someone with individual style, who buys our products and we appreciate them so much.

We’ve been featured in Sunday Times Style and British Vogue and this year saw our inclusion in the latest MXGP Video Game, where players can dress in 250LONDON gear.

We are the only British moto clothing brand to be featured. Same for the upcoming release of the Supercross game, it’s out early 2020. So, yeah,

We’re getting noticed and after 4 years we’re still bringing out new collections and people are still buying them!

In which countries does 250London and 250wrc operate?

Jen: We sell our products all over the world via our web-store. USA, Australia, Mexico, all over Europe and the UK and we’re working on establishing retailers in other countries. In fact, we hope to do some European events next year to help grow our reach over there.

What plans does The WRC have, for in-person events or other activities?

Jen: Definitely! Events and meetups are on the cards for sure! I feel so lucky that I’ve already met so many riders around the UK who’ve joined the club and I hope to meet more in person as time goes by. Women riders I already knew have been hugely supportive of the club.

The WRC is powered by 250LONDON but it’s very much driven by me, I’m a highly-motivated person and I get a huge amount of joy from piecing the stories together.

I’m not a professional writer or journalist but I’ve established a ‘house style’, for the blogs and I think it works really well with the stories, which are written in the first person, making the stories all the more personal.

I have to say, The WRC is turning me into an emotional wreck! Some of the stories are so heartfelt, written from the heart with a great deal of honesty, which makes them very relatable to the women reading them.

What’s on the horizon for 250London and The WRC?

Jen: For 250LONDON, it’s a case of keep on keeping on, for the foreseeable future. And, not letting the challenges get us down. You know, we’re not some daft wee internet brand, we know our craft, we’re skilled and experienced, but we’re also entirely self-funded so growth will be reflective of that.

The WRC will keep going as long as women riders keep sharing their stories with us!

Lastly, any advice for woman riders out there with stories to share?

I invite any women riders reading this feature, to consider writing about an experience they’ve had or even one that’s coming up. And naturally, one that they’d like to share with other women riders around the world.

Don’t be shy, even if you think you can’t write, just start typing and I guarantee you’ll find your flow and will have a blog size story in no time! Just make sure you’ve lots of cool pics to go with it, the pics make the story.

Type to search or hit ESC to close
See all results
» Custom Lifestyle & Culture » The WRC: A Unique Moto Platform For Women by 250London