Triumph Motorcycles recently released details of its much-awaited, new (2021) Speed Twin. Here’s what has changed and what you can expect from the new model.

Triumph’s Speed Twin quickly became a firm favourite within Triumph’s Modern Classics range. It has the (much loved ) stripped-back aesthetic of the Street Twin, deftly combined with enhanced performance and ride experience offered by Triumph’s grunty 1200cc twin-cylinder engine. And with changes in mind, the engine’s probably a good place to start. 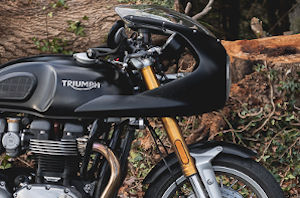 There’s a significant update to the Speed Twin engine, driven largely by Euro5 legislation. Despite that, power is up by three PS, which is near as dammit 3HP in old money.

A change in that isn’t going to be that noticeable on the road.

Nonetheless, the bump in mid-range power and peak torque of 112nm at 4,250rpm (a lower point than the previous model) WILL be perceptible.

That, combined with a 17% reduction in inertia should make the new Speed Twin feel a little peppier and livelier than the outgoing model.

A lighter crank, high compression pistons, revised cam and port profiles, alongside a secondary air system all sound promising. But it’s not until we get to ride one that we can really comment on how it changes the riding experience.

There will however be riders disappointed with a 1200cc motor that only puts out 100bhp but this is still a relatively relaxed and unstressed engine. It’s the wallop of torque that makes the bike fun to ride and we’re still of the opinion that 100hp is a sweet spot for riding on the road.

Many riders at some point will have ridden motorcycles with double the horsepower of this bike. And some may wonder about the advantage of such machines on UK roads. The answer is not much (within the law) beyond an appendage (stats) swinging competition. But for everyday road riding? Not very much at all.

Moving on to suspension: a significant upgrade to the shocks and forks has (on paper) further improved what was already an excellent handling machine. Cartridge damped Marzocchi USD forks appear on the front, with Kayaba twin shocks to the rear.  The latter is preload adjustable but surprisingly the front isn’t.

Given that Triumph now quotes its kerb weights as wet, it’s tricky to tell if this bike is any lighter than the outgoing model. The specs show 216kg wet, compared to 196kg dry. Yet with a full (14.5-litre) tank, combined with other fluids, it’s likely the overall weight is unchanged from the outgoing model.

Another surprise is the choice of tyres – Metzeler Racetec RR; a fairly aggressive option. We can’t find any details on the tyre compound selected for the new model. However, it’s likely that Triumph has opted for the harder option for both the front and rear as it’s fitted as an OEM homologated tyre.

Electronics have had a refresh too, in the form of upgraded riding modes: Road, Rain and Sport . Traction control is switchable with a dedicated button on the controls and the new LED lighting features a Daytime Running Light.

Styling-wise not much has changed; it seems to be a case of if it ain’t broke, don’t fix it. Unquestionably, the new wheel design stands out. As does the change to the exhaust, with the black silencer replaced by a brushed stainless steel version. Thumbs up for that – however, it does have a black end cap, so maybe only one thumb.

The new anodized headlight arms are a little more subtle and of course, the use of USD forks means a change to the mudguard mounts is required to provide some protection to the fork leg. The twin clock display all appears to be the same as before.

There’s a new tank graphic on two of the colour schemes: Red Hopper and Matt Storm Grey. However, the Jet Black bike has just the Triumph script on the tank and might be the prime choice for most riders.

As you would expect from Triumph there are over fifty, catalogue accessories from which to choose including luggage, seats and all manner of dress-up goodies.

This new machine is definitely more evolution than revolution. As such, riders that were hoping for a Speed Twin R model will likely be disappointed. However, that’s not to say that such a model won’t be released at a later date.

Triumph got it pretty much right with the original bike – so, it’s good to see that they’ve not messed around with the formula too much. Adjustable shocks would have been a good addition. Perhaps, more bravery with the colour options may have widened appeal too. Nonetheless, this retro roadster is most certainly still an attention grabber.

The new Speed Twin will be hitting dealers in August 2021, with a price tag of £11,000 which is £300 more than the existing model. Regardless, we are definitely looking forward to getting one out on the road.