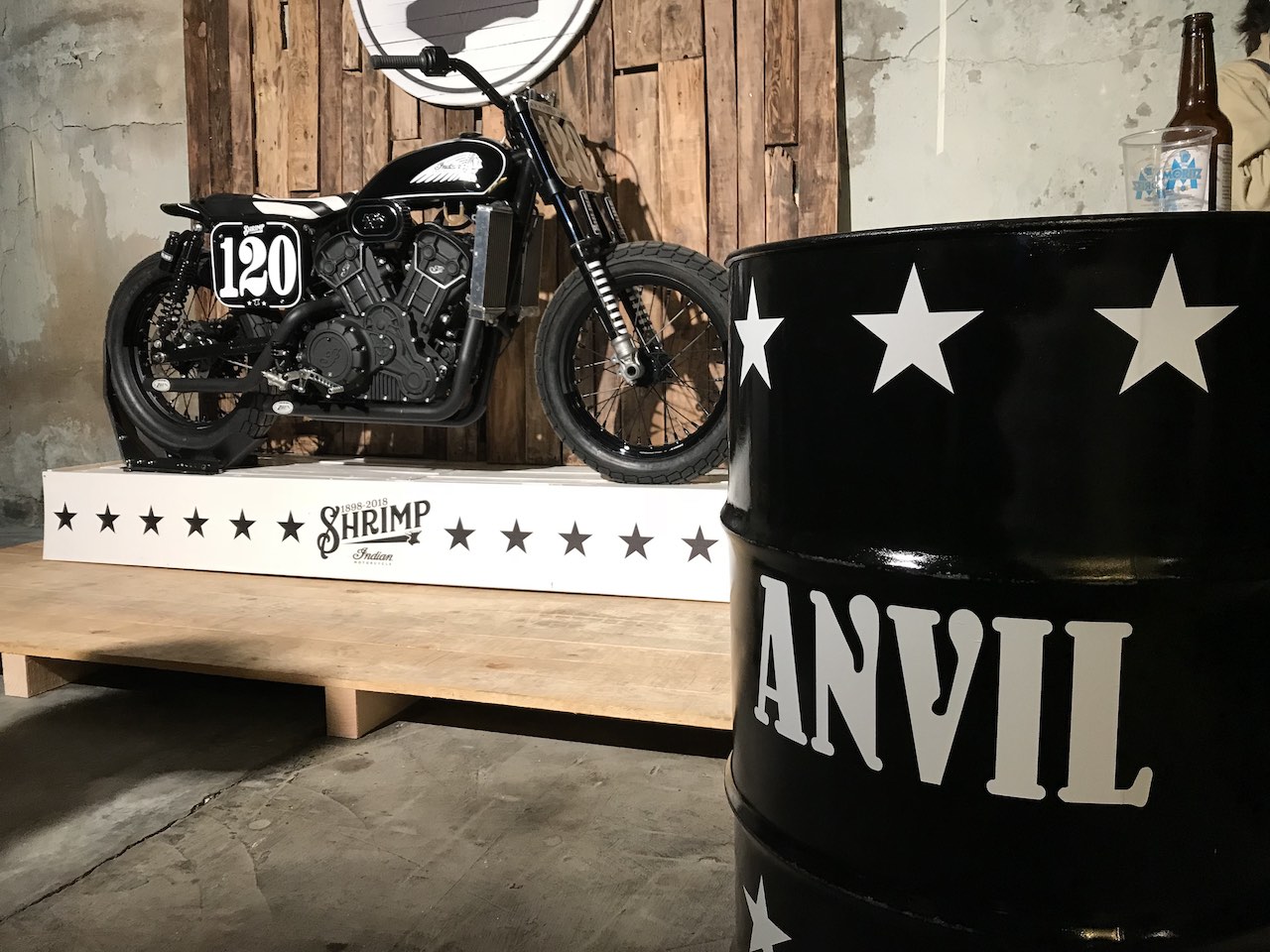 Let’s be quite clear, creating a custom motorcycle with clean, classic lines from any new large engine, stock motorcycle is quite frankly a tough gig. Strangulating exhausts systems, cabin-luggage sized cats and airboxes so large they require a dummy gas tank to hide, are just a few reasons.

Add to this the liquid cooling, various electronic components and fifteen miles of wiring harnesses and you can see the scale of the problem. Hence why Italian metalistic style gurus Anvil Motociclette stripped their 2018 Indian Scout Sixty to its bare bones and started from scratch.

The result is an exquisite monochrome flat tracker called the Shrimp, and this is the story of how it came into existence.

Anvil Motociclette’s base in northern Italy is in the heart of the Emilia Romagna region. Throw a stone in any direction here in North-East Italy, and if it doesn’t smash the window of a fashion house in Milan, it’s going to ping off the tank of a Ducati or dent the roof of a Ferrari.

It would be impossible not to absorb the heady mix of high fashion and high octane manufacturing that prevails in this area.  San Marco Filios and Alessandro Phonz Fontanesi, co-collaborators at Anvil, appear to be the perfect amalgamation of both.

Anvil considers itself to be a lifestyle garage heavily influenced by the perfect storm of superbikes, technology, and fashion that defined the 1970s. Look at any of their custom builds (or clothing range for that matter), and the influences are apparent.

The Shrimp came about by yet another of San Marco and Phonz’ passions; namely, reading-up on motorcycling history. The ‘Shrimp’ in question refers to an early 1900s’ board track racer, Albert ‘Shrimp’ Burns, whose diminutive size earned him the nickname.

Burns started out by winning board track events on his home-built Indian racer at just 14 years of age. By 1920, he fulfilled his dream of becoming a works rider for Indian but crashed in the opening race at the beginning of the season.

Despite being heavily bandaged from injuries sustained by crashing on the wooden board track, Burns entered the next race on a bike borrowed from a teammate. Against all the odds, Burns went on to win the race.

Not only that, but his borrowed 3-speed, rigid framed, Indian Powerplus, smashed the track record becoming the first stock bike to do over the ton in competition.

Four months later, just days after his twenty-third birthday, Burns crashed during a race, subsequently dying of head injuries. It was this tale of commitment, raw talent, and courage that went on to inspire Anvil to build the Shrimp; an Indian Scout flat tracker.

The brand new 2018 Indian Scout Sixty, arrived at anvil HQ in February of 2018.  The intention to unveil the project at Wheels and Waves; June’s speed and surf festival in Biarritz, and so the clock was ticking.

The first job the boys undertook was to liberate the 1133cc V-Twin engine from its stock surroundings. With such a short turn around time, the dynamic duo also increased the size of the build team by another six members.

This decision allowed Phonz and San Marco to have creative control of the project and keep, what was a very technical build on track. Amongst the three-hundred painstaking working hours of labour, they did however find time to hand-beat the petrol tank, rear mudguard and race plates.

Although 3D renditions of the bike took up a lot of time,  the hand bent, tig welded, full cradle frame, were still being tweaked right up to the last minute.

Anvil took great care finding just the right suspension and rolling stock, which would generally be for purely aesthetic reasons, but the duo had one more trick up their sleeves.

To test the strength of their build and to truly honour the memory of Albert Burns, there was no way the Shrimp could be a mere show pony.

When unveiled at the Artride Exhibition, the boys announced their intention to enter the Shrimp into one of Wheels and Waves favourite events. Flat track racing is becoming increasingly popular in Europe, and the El Rollo flat track race attracts riders from all over the world.

Fellow Italian and flat track champion, Emanuele Marzotto, was lucky enough to be chosen for the Shrimp’s maiden run.  “This is an honour for me to retrace the story of a great rider,” said Marzotto at the time. “While Anvil Motociclette has focused on creating an amazing bike, my aim is to go beyond beauty and to race as fast as I can.”

“Not many people know about Shrimp’s story, but we think all passionate bikers should know about him. He’s been an inspiration, and this is more than a bike for us, it is part of our lives as customisers and as a creative studio,” said San Marco and Phonz.