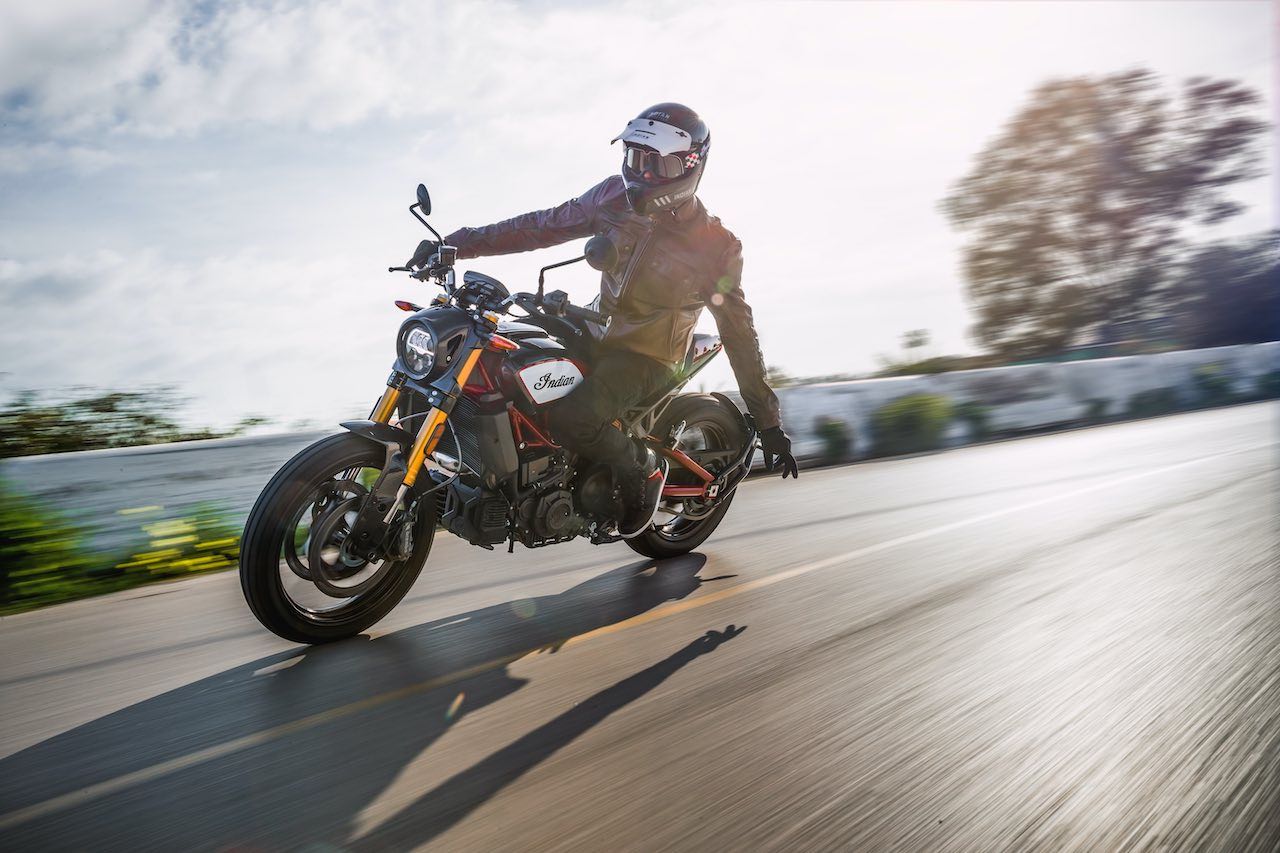 Naturally, fans politely demanded to see a street tracker version. In response, Indian built the Scout FTR 1200 Tracker Custom in 2017. That bike served as the prototype for its FTR 1200 line-up.

A year later at Wheels & Waves, a production version of the Scout FTR 1200 was shown – eventually appearing on showroom floors in 2019. All to immense approval.

In terms of finish, this carbon derivative is closer to the original FTR 1200 Custom tracker that initially spurred the model range (now numbering four bikes). That includes the standard, the S and Rally versions of the FTR.

As one might expect, the Carbon introduces fine carbon bodywork – alongside the substitution of other parts for superior alternatives. Components that have received the carbon makeover include; the front mudguard/fender, headlight nacelle, tank/airbox cover and seat cowl.

Finally, the centre of the tank is enhanced with an FTR Carbon-branded console plate. Red and grey lettering on gloss black. Prominent enough to be special, yet understated enough to not detract from the overall refined finish. Altogether, the Carbon has an air of a cultured troublemaker.

Aside from the carbon parts, the FTR Carbon already has an excellent fully-loaded specification sheet. Loosely based on the Scout, its 1203cc, liquid-cooled, V-twin engine produces 130hp [97kw] and 120 NM of peak torque.

Indian promises that the motorcycle has “…an impressively flat torque curve and strong acceleration throughout the RPM range”.

Preload, compression and rebound adjustable shocks are found both front and rear. 43mm inverted forks offer 150 mm of travel at the front. As such there’s plenty of scope to achieve the perfect setup.

Bringing all of that power to a stop, are the sharp, radially-mounted, dual-disc Brembo [ABS] brakes (single at the back), combined with traction control.

The riding position is upright, undoubtedly making it suitable for urban commuting, but equally out-of-town runs. As a convenient touch for those extra-urban miles, cruise control is included as standard.

While the bike may be retro in guise it’s fitted with modern accoutrements. Meaning, full LED lights are found front and back for greater visibility. Equally, the instrument panel setup is proudly from this century – a 4.3″ LED touchscreen. Add to that a USB fast-charge port and Bluetooth compatibility, for convenient charging and device control respectively.

Those who’ve ridden the FTR, suggest it’s positively unruly. So at least two of its three Ride Modes (Sport, Standard, Rain) combined with stability/wheelie management control may be of some comfort. That’s if it proves a little too hot to handle.

The FTR Carbon is available now at Indian Motorcycle dealers, priced at £14,699.