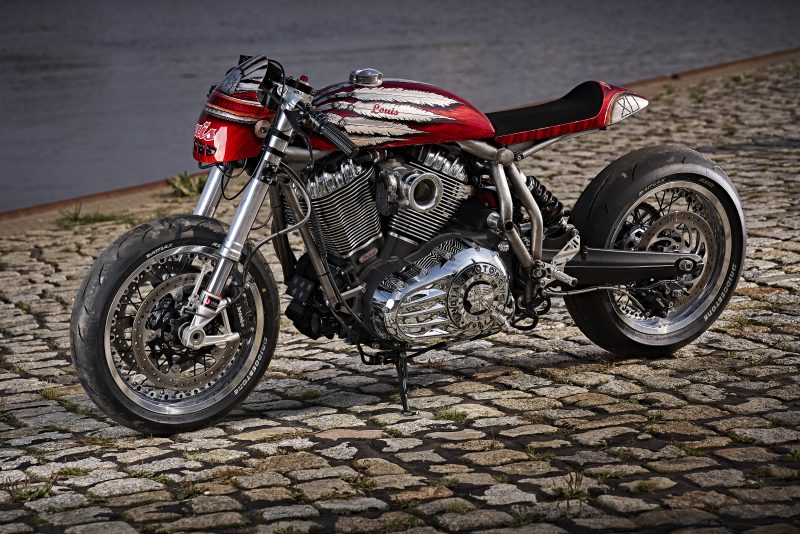 Custom motorcycles are an art form, that’s a given.  Welcome to Engina – 125 horses worth of Indian – with attitude. Café racers, like apocalyptic zombie bikes, are all the rage but what makes Engina stand out? It may be the 111ci Indian Chief Thunder Stroke engine, the one-off frame, or perhaps the custom paint job.

In reality like all custom bikes that grab your attention, it’s a combination of all three. Where Engina kicks it up a gear though, is the ability to deliver on its visual promise.

Despite beginning life as one of Indian’s laid back, retro leather-baggers, the builders took the engine and ran in the opposite direction, producing a wolf in wolf’s clothing.

Detlev Louis Motorrad-Vertriebsgesellschaft mbH is Europe’s largest motorcycle clothing and accessory retailer. To mark the company’s 80th anniversary, they set out to build a unique bike that would reflect its pole position in the industry.

The brief was handed over to Detlef Stüdemann and Martin Struckmann from the company’s Gearhead Crew. Several custom ideas were floated, only to sink without a trace, until the pair hit upon the café racer theme.

With the focal point of any café racer being the engine, the choice of power plant was crucial.  The crew considered all the usual suspects. However, the irony of taking something as laid back as an Indian Chief Vintage and transforming it into a fire-breathing tarmac scorcher was too delicious to ignore.

After ditching everything except the engine, electrics, and swingarm, the crew got to work on the ultra-lightweight monocoque frame. Meanwhile, the engine was packed off to four-stroke tuning legend, Ulf Penner.

One hundred and twenty-five horsepower and power-hike of almost 70% is a testament to Penner’s tuning skills and the robust design of the Indian Thunder Stroke engine. To ensure the audio lived up to the visual, an ST Parts handmade exhaust comprised of 80 separate pieces, coaxed all those ponies to exit through a Shark silencer.

Back in the workshop, the Gearhead Crew balanced Wilbers USD forks with a matching rear shock. Brembo callipers were chosen to bring the party to an end. One-off Kineo laced rims, Alpha Racing triple-clamps, and Gilles clip-on handlebars with micro-switches completed the line-up.

The headlamp nacelle, seat, and tank are the design work of crewmember Kaye Blank, beautifully executed by world champion, custom bike builder Michael Naumann. While the red and white headdress paint-job, which fuses the Indian’s legacy and the Louis brand, was carried out by Danny Schramm of Schrammwerk fame.

The Gearhead Crew were justifiably proud of the finished job. The only thing left to do was roll the beast out and let it rise or fall on its own merits. Engina’s first official outing, at the Glemseck 101 festival of speed in Germany, blew race fans away both on, and off, the track.

Since then, the bike has won best of show in Dortmund, Berlin, Zurich, and Turin, as well as runner-up in the highly acclaimed invite-only Emirates Custom Show.

Not one to rest on its laurels, Engina will be on show throughout Europe in 2018, before making a triumphant return to the Glemseck 101 Sprint in August.

Burt Munro may well have built the world’s fastest Indian, but the Detlev Louis Gearhead Crew have undoubtedly built the coolest.