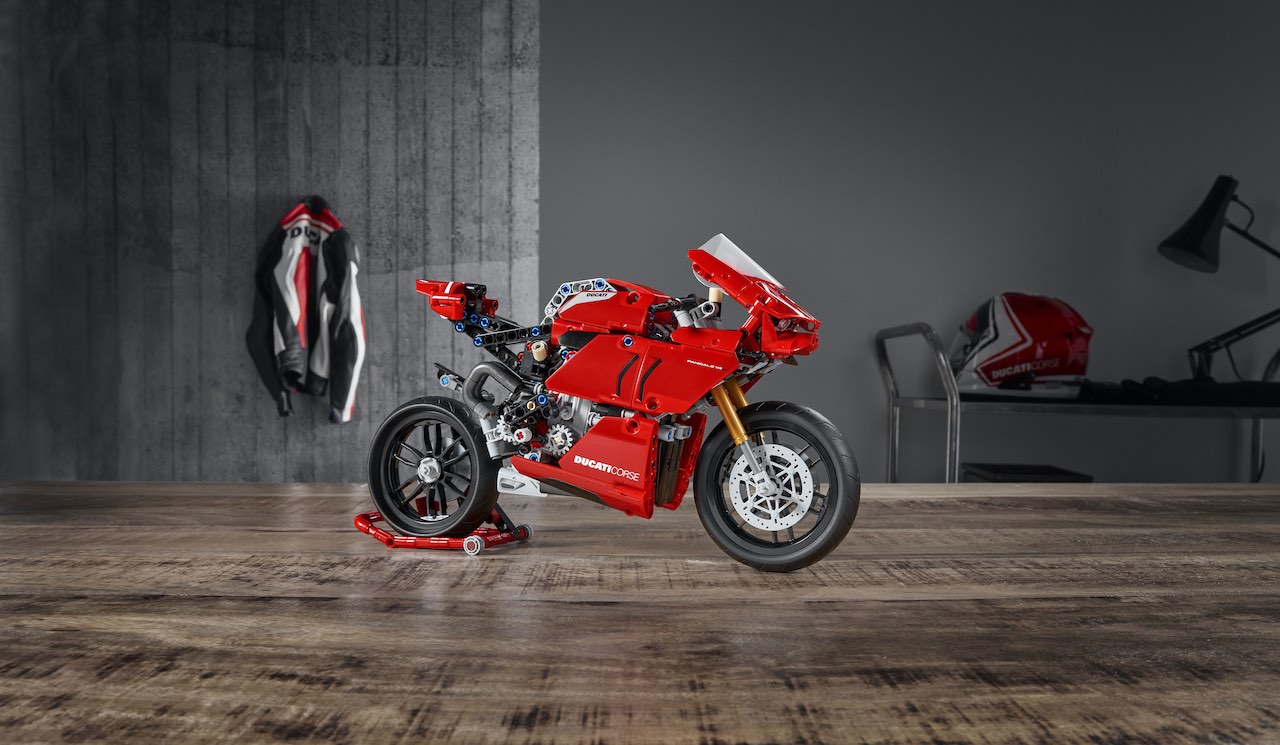 Designed for adult-kids and actual kids, this Ducati LEGO Panigale V4 R Technic may alleviate pangs of yearning and desire. At least until you’re able to buy the real thing.

Most motorcycle enthusiasts will appreciate the aesthetics and engineering vision of the Ducati’s most powerful sportbike.

And if inclined towards owning such a bike, at £34,995 the 221HP Panigale V4 R will likely forever remain a dream/fantasy bike.

Apologies, if that statement’s shattered your world somewhat or if you happen to own a V4.

For those that don’t own the real thing, you can now at least soothe your sorrow with this 646-brick, Panigale V4 R, LEGO Technic reproduction, finished in traditional Ducati red livery.

Surprisingly, it’s the first such collaboration between LEGO and Ducati. Yet one that the Bologna marque says: “expresses and respects the values of ‘Style, Sophistication and Performance’ that characterize the brand”.

As a toy for big kids (adults) and real kids this model measures, 32 cm (L) x 16 cm (H) x 8 cm (w). And in another first, it’s also the only LEGO® Technic™ motorcycle model to include a functioning gearbox.

According to Ducati, the “innovative 2-speed gearbox” is there to simulate the different speeds and riding techniques that a Moto GP V4 R rider might experience.

And while it may not exactly live up to that sort of hyperbole it’s undoubtedly a very cool touch. Equally, it introduces an element of real engineering into the construction of the model. That fact will likely inspire kids, both big and small.

A tremendous amount of detail has been packed into this LEGO model. In fact, a quick glance at the model from certain angles might give the impression it’s the real McCoy. Solely viewing the front wheel and twin-disc brakes (replicated with excellent accuracy) may further cement that impression.

Also adding to the realism – both front and rear suspension, along with steering have been designed to mimic the movements of the IRL model.

Further intricate detail can be seen with the miniature Akrapovič full-racing exhaust pipe, windscreen and instruments. Once assembly is complete, the model can be hoisted onto a paddock stand (supplied in the box) for display. Just like some might do with the real Panigale, you may be thinking.

Designed for Ducati fans aged 10+, the model will be available to buy in Ducati dealerships, the Ducati Online Shop. And of course additionally in LEGO stores, both on and offline from 1st June 2020.