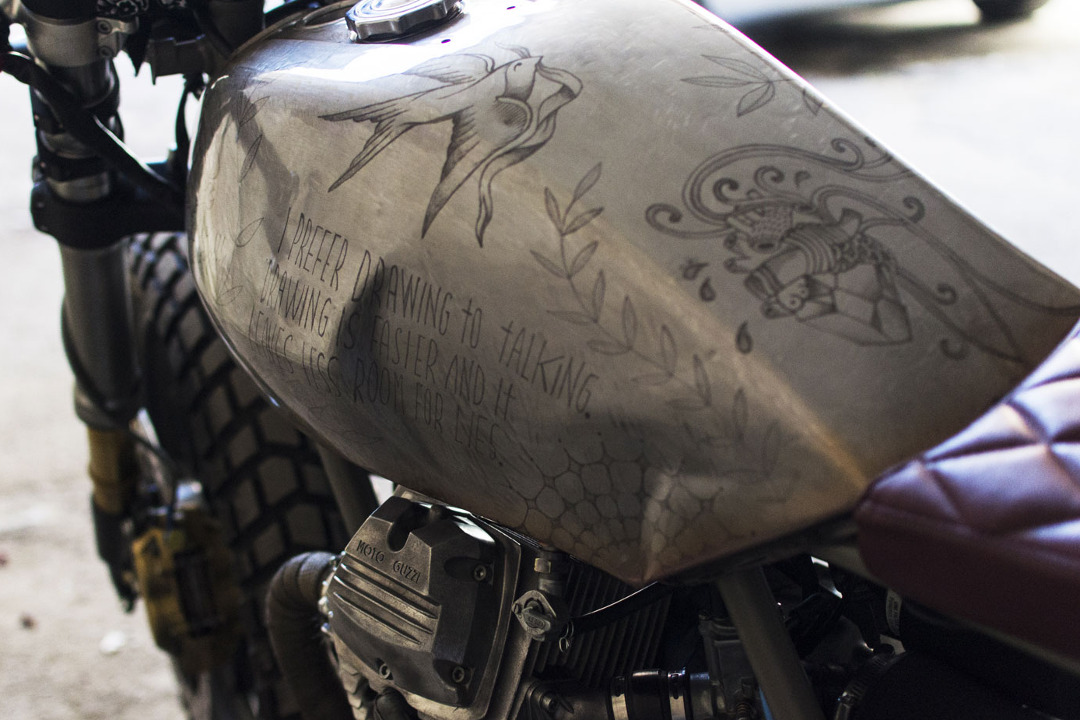 For sure you’ll agree, the detail on the tank of this unruly-looking Moto Guzzi V35, cafe racer by Entrophy Motor Bike, is quite simply….. exquisite.

Italian, Through and Through

“Our first goal was to make it more attractive and gritty without losing the agility..”

Marco Peter at Entrophy, in Perugia, Italy managed to source a Moto Guzzi V35 ‘Imola’ [produced between ’79 and ’83] and set-off on a mission to make the angular 346cc air-cooled, bike more attractive and gritty but at the same time maintain its inherent agility.

Taking “….inspiration from the noble tailoring world“, Entrophy opted for a “cut and stitch” approach. The team have retained the original patina of the bike, giving it an authentic and raw edge – like a former fighter with the scars of previous bouts.

The front-end borrows a fork-set from a Honda CBR1000 – paired with chunky tyres, giving the V35 a raised profile. That, along with the shortened frame gives the bike a meatier front-end and makes it look far stockier than the original.

The angular tank of the original Moto Guzzi V35 is distinctive enough, however, Marco required something much more standout for this build. That’s when in a lightbulb moment he and the team settled on a brushed aluminium finish, adorned with an ink-like design based on Marco’s tattoos.

Sometimes we feel as though we’re part of the machines that we ride. In this case, it’s almost literally true (…almost,) though rather the bike is wearing the skin of the rider, so to speak.

The name Marla was inspired by the enigmatic character of the same name, from the book Fight Club by Chuck Palahniuk. It’s a fitting name, for a bike shrouded in tattoos – each with a meaning no doubt known by Marco – yet a mystery (just like the character Marla), to everybody else.

At the rear, there’s a plush diamond-stitched, maroon, single racer seat – which nevertheless can accommodate a pillion. The saddle also houses an integrated taillight which keeps the rear of the bike looking neat, in a practical and polite manner.
The rear may be polite, but make no mistake, on the whole, this bike is a hooligan but a beautiful hooligan, at that.