Protective motorcycle apparel in earlier BSMC collections only lasted for limited runs. Most took the form of collaborations with established motorcycle equipment, apparel and accessories brands such as Hedon, Goldtop England, Fuel and Rokker (to name a few).

Crew members of the BSMC provided input into the proposed design of the garment. Strong consensus was formed in deciding the external look of the jeans.

But purportedly, there was some to-and-fro about which direction to take the internal construction of the jeans. As such, two distinct camps were formed – “some wanted everything, some wanted nothing more”.

Reaching an impasse, the team at the Shed decided to produce two sublime pairs of jeans – much to everyone's benefit! 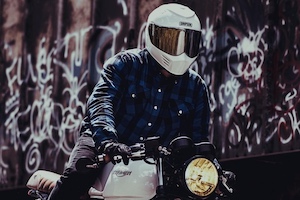 Buy the latest retro-inspired riding apparel and equipment at RevZilla

Both motorycle jeans take the form of a classic five-pocket, slim tapered, single-layer, indigo jean. To boot, they're constructed from COVEC denim which has a high resistance to abrasion, cutting and tearing.

The other is the BSMC Resistant BSR01 Jean – a non-armoured version of the jean that still offers abrasion resistance – given the material and construction. Naturally good to know, should your derriere unexpectedly make contact with the asphalt.

Whether these motorcycle jeans are the first of more rider PPE from BSMC, remains to be seen. Equally so whether there will be an equivalent jean for women.

Nevertheless, the launch of self-branded protective riding gear marks a significant, though not entirely unexpected path of progression for the brand.

And whatever additional such goodies the future and BSMC bring, in the present these jeans are likely to be incredibly popular.