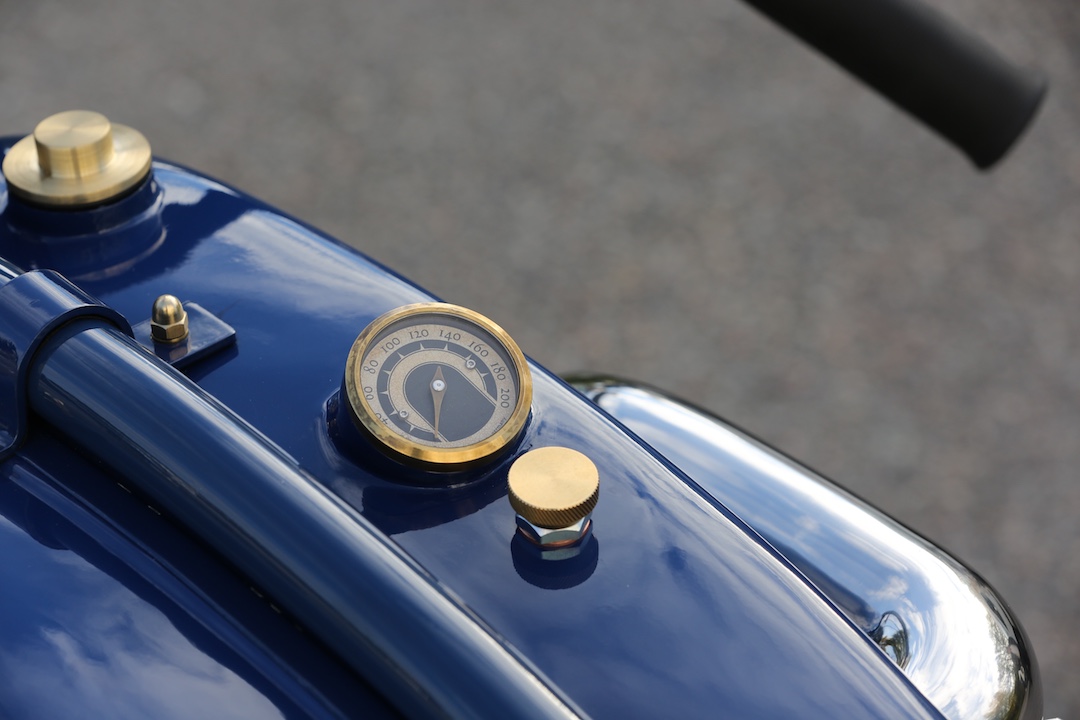 You’d be forgiven for believing that this Indian Scout custom has been transported through time from a 1920s board track race meet. In fact, it’s a 2016 Indian Scout. And it’s been painstakingly customised to look like a boardtracker. (A tribute to Oscar Hedström, the Swedish co-founder of Indian Motorcycle.)

Both are American big-twin specialists with a penchant for building vintage bobbers and choppers.

An ode to the  Scouts of old

This Indian Scout custom build, employs an especially smart use of space, with a custom frame and false fuel tank, to cleverly hide modern technology. This allowed the pair to echo the lines of the near-invincible Indian Scout board-trackers of old – emulating the slim silhouette.

“We wanted to build a bike that was related with the Indian history of board track racing and at the same time included the new era of technology that Indian stands for today. The Scout model was the perfect choice and we came up with the name Super Scout to honour the old Scout models that were almost unbeatable on the race tracks.”

The addition of the distinct Leaf Spring fork, synonymous with Indian Motorcycle in the early 20th century, excellently captures the aesthetic of the era of board track racing.

That combined with the board-track drop bars by Roth Engineering, solidify this custom’s board tracker credentials.

According to Lasse, the custom frame which was built in three sections was the most difficult part of the build. Surprisingly, even more so, than installing the turbo.

Speaking of turbo, much in the same way board tracker bikes were built for speed and performance, the very same ideals were placed at the forefront of this build.

The Super Scout features a water-cooled Garret 25 turbo, which has given the bike an extra edge. The Scout now produces 150hp to 200hp at the rear, dependant on boost pressure.

Despite its old-school looks, the duo has integrated a fully programmable ECU, along with a key fob system including Bluetooth for monitoring engine data and tuning the ECU via an iPad.

A dummy fuel tank hides all the electronics including the throttle body, in addition to the front master cylinder and other components. The actual fuel tank is fitted underneath the H AND F Mesinger board-track replica saddle and uses an Indian Scout internal pump.

“We wanted to give the bike some extra boost of power and to also show that we can combine an old-school look with modern technology.”

There’s still some fine-tuning of the turbo to be undertaken over the coming months which Anders is looking forward to. However, you’ll likely agree the aesthetics are just perfect as they are.